Teleology (a.k.a – what is the purpose of this post?)

Recently, I finished an artificial intelligence project that involved implementing the Minimax and Alpha-Beta pruning algorithms in Python.

These algorithms are standard and useful ways to optimize decision making for an AI-agent, and they are fairly straightforward to implement.

I haven’t seen any actual working implementations of these using Python yet, however. So I’m posting my code as an example for future programmers to improve & expand upon.

It’s also useful to see a working implementation of abstract algorithms sometimes, when you’re seeking greater intuition about how they work in practice.

My hope is that this post provides you with some of that intuition, should you need it–and that it does so at an accelerated pace.

Ontology (a.k.a – how does this abstract idea __actually work__, in reality?)

Let’s start with Minimax itself.

Assumptions:  This code assumes you have already built a game tree relevant to your problem, and now your task is to parse it. If you haven’t yet built a game tree, that will be the first step in this process. I have a previous post about how I did it for my own problem, and you can use that as a starting point. But keep in mind that YMMV.

How-to:  To use this code, create a new instance of the Minimax object, and pass in your GameTree object. This code should work on any GameTree object that has fields for: 1) child nodes; 2) value. (That is, unless I made an error, which of course, is very possible)

After the Minimax object is instantiated, run the minimax() function, and you will see a trace of the program’s output, as the algorithm evaluates each node in turn, before choosing the best possible option.

What you’ll notice:  Minimax needs to evaluate **every single node** in your tree. For a small tree, that’s okay. But for a huge AI problem with millions of possible states to evaluate (think: Chess, Go, etc.), this isn’t practical.

How we solve:  To solve the problem of looking at every single node, we can implement a pruning improvement to Minimax, called Alpha-Beta.

Then, if ever we get to a node with a child who has a higher/lower value which would disqualify it as an option–we just skip ahead.

Rather than going into a theoretical discussion of WHY Alpha-Beta works, this post is focused on the HOW. For me, it’s easier to see the how and work backwards to why. So here’s the quick and dirty implementation.

How-to:  This algorithm works the same as Minimax. Instantiate a new object with your GameTree as an argument, and then call alpha_beta_search().

What you’ll notice:  Alpha-Beta pruning will always give us the same result as Minimax (if called on the same input), but it will require evaluating far fewer nodes. Tracing through the code will illustrate why.

Phenomenology (a.k.a – how will I perceive this, myself?)

This isn’t the most robust implementation of either algorithm (in fact it’s deficient in many ways), so I wouldn’t recommend it for industrial use.

However, this code should simply illustrate how each algorithm works, and it will provide output you can trace through and compare against–as long as you are able to construct the GameTree for your problem.

From there, it’s only a matter of time until you’ll understand it intuitively. This is one of those things that took a little while for me to grasp–so hopefully having a clear example will help others get there more quickly. Good luck.

I’ve been working on a AI project today and came across this problem.

I need to parse and build tree which has an arbitrary branching factor, and values only at the leaves.

(As for why:  Later, I’ll be running Minimax and some other algorithms on this tree, in order to algorithmically determine the best possible game move. More on that in another post.)

This seemed like a good problem to solve recursively. And to avoid a soul-sucking debug session, I decided my goal was to solve it as succinctly as possible.

Here’s what I came up with. Why I’m posting: This seems like it would be a very common AI/Data-Structures problem, but my first few searches on the subject came up with nada. Nothing even closely related to the problem I’m solving. So doing my part to fix that now.

Side note. I’m actually not sure what this tree (with weights only at the leaves) would be called technically. It reminds me of the tree made during Huffman Encoding, but it’s not quite a match for that since we aren’t summing the values in all parent nodes. If you know the technical name, let me know, so I can update.

Example code to start experimenting with the Harris Corner Detection Algorithm on your own, in Matlab. And some of the results I obtained in my own testing.

Among the classic algorithms in Computer Vision is Harris Corner Detection. (For the original paper, from 1988, see here.) The problem it solves:  Given any image file, can you find which areas correspond to a corner with a high degree of certainty?

The answer is yes. And the algorithm is elegant. Essentially the steps are:

Recently, I was trying to implement my own version of the Harris Detector in Matlab, and ended up banging my head against the wall for a few hours while figuring out some of the subtler details the hard way.

Here’s the code I came up with, and some examples of the outputs. Grab the code from both gists below, and you can start experimenting on your own.

Here’s what you can expect to see. I’m coloring the corners RED, using circles that grow larger the more likely the area is to hold a corner. So, larger circles –> more obvious corners. (Also note that I’m downsizing my output images slightly, just to make computation faster. ) 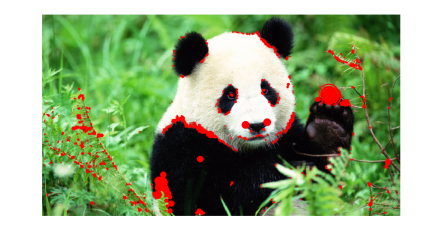 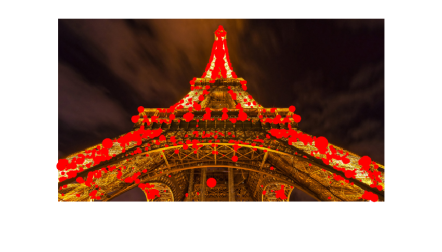 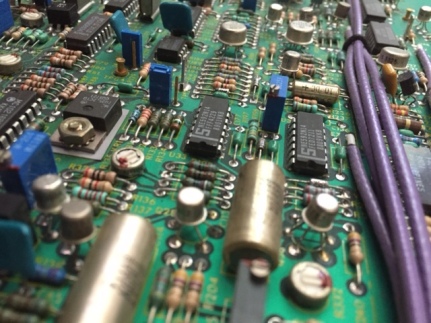 That’s it. With this code, you can start experimenting with Harris Detectors in about 30 seconds. And hopefully the way I’ve written it is transparent enough to make it obvious what’s going on behind the scenes. Most of the implementations out there are somewhat opaque and hard to understand at a conceptual level. But I’m hoping that my contribution will make this all a little more straightforward to those just gettings started. Enjoy. -t